American History in the Planetarium 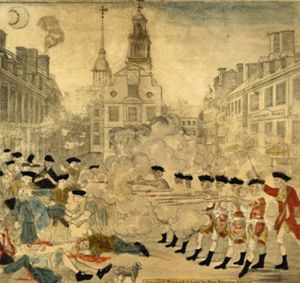 Some of the richest resources of astronomical events and history are the articles of Dr. Donald W. Olson of Texas State University at San Marcos. He has written on an incredible number of topics, including this subject, published in the March 1998 issue of Sky and Telescope, which deals with the Boston Massacre.

The Boston Massacre occurred in 1770. Relations between the colonists and the occupying British troops were very strained, and on the evening of March 5 a group of angry townspeople gathered. They harassed the British guard outside the Town House on King Street, and at 9 PM the British called out more troops to handle the menacing group.

The crowd of colonists threw sticks, snowballs (it had snowed heavily the night before leaving a foot of snow on the ground), and ice at the soldiers. Captain Preston was in front of his men trying to restrain them from losing control, but eventually a shot was fired and then several others rang out haphazardly. When all was said and done, five colonists lie dead or wounded on the ground. 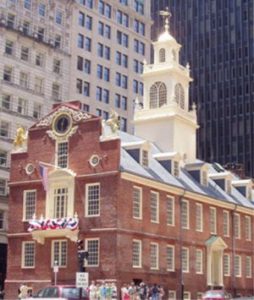 The most famous engraving of this incident was made by Paul Revere and is shown in Figure 1.

There are several gross inaccuracies in this engraving as Revere was trying to incite anger and resentment against the British for this incident. (In fact, John Adams would eventually represent the soldiers accused of murder in this confrontation and because of his skill as a lawyer the court found them all innocent!)

Notice that Captain Preston is shown behind his men and they are firing orderly in a volley seemingly at his command. This is a fabrication. Also note that there is no snow on the ground.

The building in the center of the engraving is the Old State House (called the Town House at that time) and it still stands in Boston today along the Freedom Trail as shown in Figure 2. Especially note the strange looking “crescent” Moon in the upper left hand corner of the engraving in Figure 1. 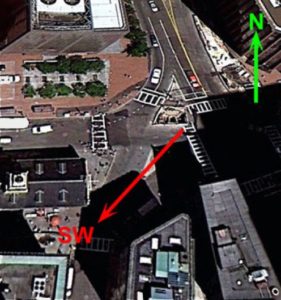 So, what remains for us to determine in the planetarium is what exactly did the Moon look like at 9 PM March 5, 1770 and where was it in the sky? How accurate was Revere in his astronomical depiction? Going to Boston, MA and the proper time and date leads us to the view shown in Figure 4. 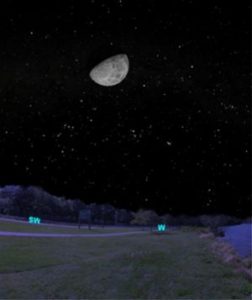 We see the Moon is in the approximate position that Revere indicated. What is also interesting is that the approximate surface area depicted in his engraving is correct, although it’s really a waxing gibbous moon and not crescent. (It’s been known for a long time that artists typically drew the Moon as a crescent because it’s more esthetically appealing than a gibbous phase.)

So, although Paul Revere’s propagandist engraving was rife with inaccuracies in order to enrage the colonists, his depiction of the position and brightness of the Moon were fairly close (the crescent phase notwithstanding!).

This fairly bright Moon coupled with a foot of snow on the ground would have given the colonists and soldiers ample light in order to see exactly what they were doing in this most famous initial skirmish which helped lead to the American Revolution.