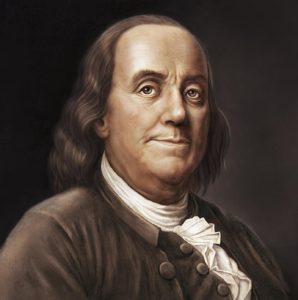 Today is Benjamin Franklin‘s birthday under the calendar we use today, although he was born on the 6th of January of 1706. He was born before the Gregorian calendar reform was implemented in the English-speaking world.

The exact time it takes the Earth to go around the Sun 365.2422 days, not an integer number of days. During the Julian period the remainder was reduced from the 365-day year by adding a leap day every four years. However, the remaining error compounded. The Gregorian calendar uses 97 leap days every 400 years instead of 100 leap days, so the average length of the Gregorian year is 365.2425 days. The Gregorian change also ran a correction to delete the accumulated lag, which had grown to 10 or 11 days.

The new calendar came into force in Roman Catholic states in 1582.

Denmark switched to the Gregorian calendar in mid-February 1700.

The British Empire made the change in 1752.

For any celebrity birthdates you want to celebrate that are older than a certain limit and come from a certain country, it may be important to see if they should be read out as a Julian or a Gregorian date.

If you bring up Starry Night with a date of October 4th, 1582, and advance by one day, you can observe the 10-day correction when the Gregorian calendar was assumed.

The only alternative to observing the ten-day gap that followed in 1582 when looking at earlier dates is to use the proleptic Gregorian calendar, which eliminates the need for a Julian calendar correction when observing past dates. I wouldn’t recommend using the proleptic Gregorian calendar for earlier dates because the people of the time did not use it either, and Starry Night will read out those dates using the Julian.

By 1752, when the British Empire adopted the Gregorian, the accumulated error had grown to 11 days, and the change was reflected in the British colonies that later became the United States. Benjamin Franklin had already been publishing Poor Richard’s Almanac since 1733, and he included a long explanation of the calendar reform in the 1752 edition.

(When Abraham Lincoln used an almanac to show the phase of the moon during the Trial by Moonlight in 1858, as in our Fulldome Curriculum, he was taking a page from one of the most popular kinds of document in the English language other than the Bible.)

The calendar reform of 1752 didn’t catch everyone by surprise, and although the correction was run in September 1752, Franklin had adequate notice before his publication deadline the previous year. The British Parliament passed the new rule as the Calendar (New Style) Act 1750, although the code used for that legislation was “24 Geo. 2 c.XXIII”, meaning it was the 23rd piece of legislation that received royal assent in the 24th year of the reign of King George II. King George had commenced his reign in 1727.

The first point of the new law, before the Julian correction, was to correct the date of the beginning of the legal new year. Although different cultures have strong traditions to begin the new year on January 1st, even now it is impractical for all of our traditions to line up on a single start date: the school year and the NFL season being a couple of examples. The British Empire up to 1752 had observed the start of its legal year on March 25th. The law passed in 1751 corrected the New Year to January 1st at the beginning of 1752, so the official year 1751 was only 282 days long.

Starry Night does not incorporate any of the other weirdness around calendar reform, except that the new year always starts on January 1st, and there is a year Zero in between the BC and CE periods. (ATM-4 does not calculate a Year Zero).

Happy Birthday to Ben Franklin, who was not born on Blue Monday (It was a Sunday in both calendars, and the days of the week have never accumulated an error).