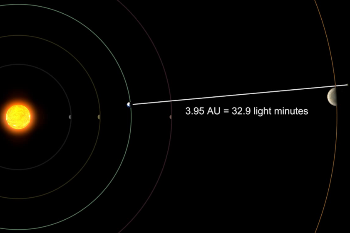 Exploring Roemer’s Method for Determining the Speed of Light

We now know it’s not infinite. If it were, the universe couldn’t exist. Remember Einstein’s famous E=mc²: if the speed of light c was infinite, the amount of energy contained in any amount of matter would be infinite! Good luck with that…

Ole Roemer, a Danish astronomer in the 17th century, stumbled upon the speed of light during timing observations of the emergence of Jupiter’s closest Galilean moon, Io, from behind the planet’s limb. He noticed the moon’s appearances didn’t match his predicted times, and by studying them through the year realized it was ahead or behind the predicted time, depending upon how far away Jupiter was from Earth! He correctly reasoned that this variation was not due to some strange inconsistency with Io’s orbit but rather that he was observing what is now called the light-time effect.

Figure 1 shows Io emerging from Jupiter’s eastern limb. This view was measured by Roemer in Copenhagen on November 9, 1676. Using Starry Night’s ability to transport us anywhere in space, we can specify a direct route to Jupiter but hold the time constant.

In other words, if we could transport instantly to 0.20 AU from Jupiter (an arbitrarily distance for a nice view of the scene), what would we see? As we travel to Jupiter, we’ll see Io appear to move further and further eastward from the limb even though time has stopped and we’re traveling on a direct line to Jupiter, as shown in Figure 2.

Figure 2: Io appears farther from Jupiter as we reduce our distance

If the speed of light were infinite, when we transported to Jupiter Io would be emerging from the limb, the same view as from Copenhagen. Because the light time effect is built into Starry Night, we see Io has actually emerged significantly past the limb. In other words, on Earth we saw Io just emerging from Jupiter’s limb, but in the neighborhood of Jupiter it has already long since passed from behind the limb!

The difference occurs because of the light time effect.

We can measure the speed of light directly from these observations. We know the distance we covered in our journey from Earth (5.326 AU = 7.968 x 108 km). We can now step back time and return Io back to its emerging position from Jupiter’s limb as seen from this nearby location to Jupiter. If we place Io back on Jupiter’s eastern limb by reversing time in Starry Night, it takes 44m 20s to do so, or 2660 seconds. To estimate the speed of light, we simply take the distance we traveled and divide it by the time, as follows:

Figure 3: Line of sight from Earth to Jupiter’s limb

Steve Sanders (Eastern University Observatory Administrator) and I have created a simulation which clearly illustrates this phenomenon, as seen in the figures below. This simulation will be included in the release of Volume 3 of the Fulldome Curriculum and you can preview it on Youtube.

Figure 3 shows the line of sight from Earth to Io as it has emerged past Jupiter’s limb, the event that Roemer was measuring. We depict the event close to opposition with Jupiter (Earth’s closest approach to the planet) and the distance between the bodies is approximately 3.95 AU = 3.67 x 108 million miles.

The same event is shown in Figure 4 when Earth and Jupiter are nearing conjunction (Jupiter nearing a syzygy with the Earth and Sun in between). Note that the distance separating the planets is now 5.75 AU = 5.34 x 108 million miles.

Roemer measured the emergence of Io as being about 15 minutes later than when this emergence occurred close to opposition and attributed the lateness (correctly) to the extra distance that the light had to travel across the Earth’s orbit.

If you assume that this tardiness is entirely due to the extra time required for light to travel the extra distance, you can estimate the speed of light as follows:

We encourage SciDome operators to use the Roemer Speed of Light minilesson in Volume 1 of the Fulldome Curriculum, along with our new simulation. The discovery of the finite speed of light forever changed our view of the universe, turning our distance-shrinking telescopes into literal time machines as we explore back into our cosmic past.