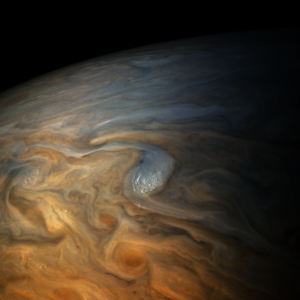 One of the astronomical highlights of last week was the pictures returned by the Juno spacecraft orbiting Jupiter when it zipped over the Great Red Spot at an extremely low altitude (8000 km.) Although the JunoCam camera on this mission was an afterthought for public outreach purposes and not a research experiment, the camera has returned some data that can be amazing when processed, and shows no signs of stopping yet, despite Jupiter’s harsh radiation environment.

To simulate this mission in Starry Night Version 7 on a Spitz SciDome planetarium, a couple of changes need to be made, even with recent updates. But with those changes made, you can simulate this flypast in Starry Night, and also think about using some of the real camera images from Juno on your dome as slides with ATM-4.

Firstly, we need to update the Space Missions file Juno.xyz. Starry Night V7 may already have a version of the mission path, but that is the *planned* mission. An anomaly in Juno’s rocket engine led to a revised mission plan with a different path. The original path does not include a periapsis over the Great Red Spot on the date in question, July 10th. To update the mission path, download this zipped folder, unzip it, and move the contained file Juno.xyz to the following location:

This change is only made in one networked location to affect both computers, to avoid tediously installing it on Preflight and Renderbox in two steps. Files added to the “ProgramData” Sky Data folder will override files with the same names added to the old-fashioned Sky Data folder in the folder “Program Files (x86)”. The “ProgramData” structure exists so that V7 users no longer need to tediously make changes to Program Files on either computer.

Secondly, the position of the Great Red Spot needs to be updated. Jupiter is not a solid body, and the Great Red Spot has a tendency to drift, and its drift rate has a tendency to change, generating an accumulating error. So it’s not practical to just use the GRS as the index for the fixed period of rotation of Jupiter that is mapped out by the surface texture in Starry Night. The value of the drift is currently about +5° per month, and the current value of the drift is about 271° in Jupiter System II longitude. (Last week I was using a value of 269° and that also came out pretty good: 269° represents the value during the Juno encounter.)

To edit the value in Starry Night V7 for SciDome, locate the following file and open it using Wordpad (not Notepad:)

You may recognize that the code inside is a little odd: Double slashes in odd places. If you are familiar with the coding, these slashes take on added significance. They should each represent the beginning of a new line of code that should be ignored by the program.

The only part of the file that is read by the program is the line that does not begin with two slashes. Please edit the file if necessary so the text is as follows, and the value is updated:

// Enter the mean longitude of the Great Red Spot on the following line. Visit
// the Starry Night Pro website at http://www.starrynightpro.com to get the
// latest value.
269.0

Then save the file into the ProgramData folder as follows, in a single step:

Once again, saving in this location means it’s not necessary to save changes on the other computer as well. 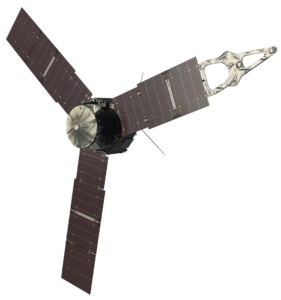 Artist’s rendering of the Juno spacecraft.

There is a 3D model of the Juno spacecraft in SciDome version 7, so you ought to be able to simulate its swooping down on the Great Red Spot in different ways: A long view of Jupiter with the Juno “Mission Path” turned on and the spacecraft labelled as a dot, or also flying alongside the spacecraft 3D model as the GRS looms on the limb of Jupiter overhead.

If you are using Starry Night Version 6 for Scidome, you can still place the attached Juno.xyz in the Space Missions folder of the original Sky Data folder on both computers and chart the updated path, but there is no 3D model of the spacecraft available. There is a separate 3D model that represents the asteroid (3) Juno, and they could get mixed up.

Because the GRS will continue to drift, you may wish to return to make subsequent edits to JupiterGRS.txt. The drift currently accumulates +5° per month, but because the drift rate can change, I recommend doing one of two things:

1) Now that you have the Juno simulation of what will probably be the best and closest images of the Great Red Spot for our lifetime, don’t make any further changes to the GRS value. Further edits to the drifting value will start to “break” the position of the GRS during the Juno flyby on July 10th, if you have built an ATM-4 automation out of it.

2) Continue to update the GRS position to represent reality based on observations, not predictions to avoid accumulating drift error. The current System II longitude of the GRS is kept up to date in a couple of places on the Internet, such as CalSky.

It is possible that Juno will have another encounter with the Great Red Spot on one of its remaining orbits, but the period of its orbit around Jupiter is 53 days. In multiples of 53 days the GRS position value will change by multiples of 9°, with some accumulation of error, and the orbital period of the spacecraft is not an integer multiple of the rotation period of Jupiter. Let’s wait and see.