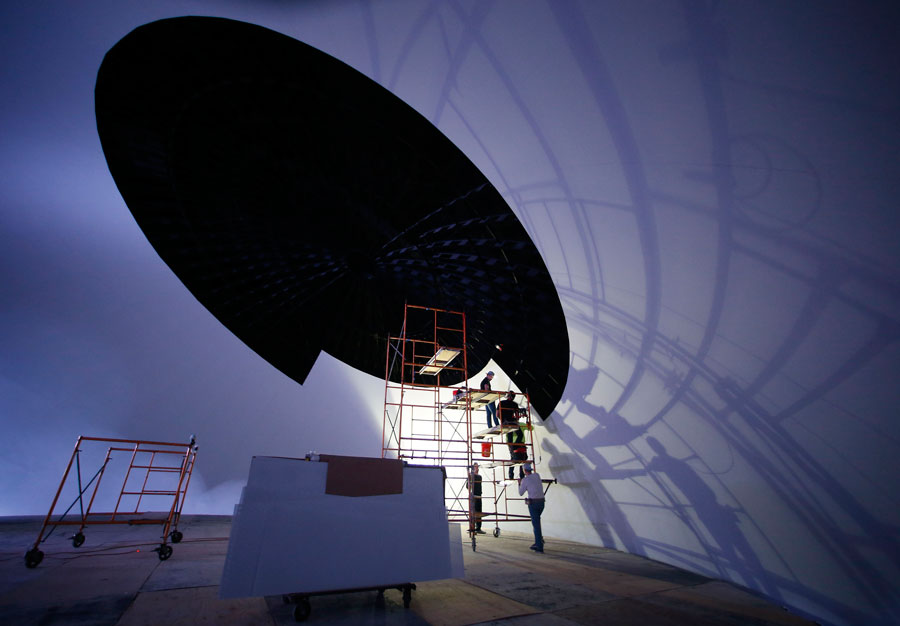 Richmond’s Science Museum of Virginia is located in an expansive railway terminal, originally named “Broad Street Station”. The museum opened in 1977, with the addition of The Universe Planetarium in 1983. The planetarium opened with a 23 meter dome, featuring the world’s first Evans and Sutherland “Digistar” digital planetarium system and an OMNIMAX 15 perf/70mm film system. The combination planetarium and film theater is one of the only Imax dome sites with a screen made by a non-Spitz dome supplier.

As part of a complete theater upgrade to state-of-the-art digital simulation, SMV’s vision included a new dome surface to enhance the visual experience. The existing screen showed visible seams and needed a dramatic overhaul to improve the projection quality. Spitz needed to accommodate the existing structure created by the third-party manufacturer, and add frame and paneling to cover the unused projection gallery at the back of the theater.

In 2014, Spitz removed the old panels and added a new frame section at the rear of the dome. The original dome paneling was replaced with a completely uniform NanoSeam surface which was perfectly matched to the original frame, giving the new theater a seamless look which vastly improved the immersive projection experience.

8K fulldome digital
The new NanoSeam dome made a huge difference in the quality of the imagery we are able to project onto it.  The team from Spitz was passionate about making it as perfect as it could be!
Richard Conti