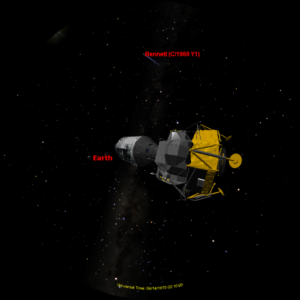 50 years ago this evening, the Apollo 13 spacecraft had its great “Houston, we’ve had a problem” moment. Apollo 13 is rendered in SciDome Preview Suite, with models representing the spacecraft both before and after panel #4 on the service module was blown off by the exploding oxygen tank. Apollo 13 has been well-documented in several different media, and you may already have recommended your regular audience should check out the ‘Apollo 13’ movie, which we all love despite a few times it took dramatic license and presented a story that was a little more dramatic than the real thing. The most accurate representation of Apollo 13 now is the website www.apolloinrealtime.org, which is presenting a stereo mix of the astronauts’ and mission control’s audio loops, with scripts, images, movie clips and diagrams in real time. The simplest way of looking at Apollo 13 in Preview Suite is to click on the hamburger icon on the leftmost pane and select ‘SkyGuide’. SkyGuide is a simple set of automations that presents an a la carte set of scenes, with descriptive text on the Preflight side. There is a ‘Space Missions’ button on the SkyGuide pane, with Apollo 13 as an option inside. The available Apollo 13 scenes are as follows: When you load one of these scenes, you may notice that they are zoomed in more than usual. This whole series was ported over from a different version of Starry Night, and may not be presented with the standard planetarium hemispherical view. At upper right are magnification controls, and you can use these to zoom out to the full field of view. You can also use “+” and “-” keystrokes to zoom in and out. The maximum field of view is the best dome view. A few minutes before the oxygen tank explosion, which happened 50 years ago tonight at 10:07 PM EST (because they didn’t have daylight saving time until after the last Sunday in April at that time), just at the top of the hour, the astronauts were discussing orienting the spacecraft so that they could observe Comet Bennett, which was the 2nd-brightest comet visible in the 1970s, and just past its peak brightness at that time. Comet Bennett is not loaded in Preview Suite, but you can add it using the same guidelines I included in the most recent comet e-mail. Comet Bennett’s orbital elements can be entered into Starry Night as follows, with data from the JPL website: Name: Bennett (C/1969 Y1) e=0.996193 q=0.537606 i=90.0394 node=2246574 peri=354.1460 tp=2440665.5446 Epoch=2440680.5 The Odyssey command module which brought the three Apollo 13 astronauts back to Earth safely is on display at the Kansas Cosmosphere in Hutchinson, KS.