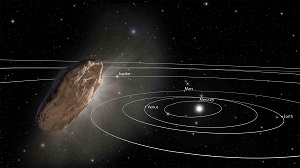 By now I hope you’re heard about the interstellar interloper that’s been passing through the inner solar system recently. This asteroid, which has been named ‘Oumuamua, is the first-ever discovered object that has been observed coming into the solar system from elsewhere in the Milky Way that is larger than tiny bits of dust.

There are several known instances of objects being “ejected” out of our solar system, so periodically there should be a chance to see a passing object that has been “ejected” from some other solar system passing by us. But only objects that pass close to the Sun or those that cast their own light are bright enough to be seen.

‘Oumuamua was discovered on Oct. 19th when it was already more than a month past its closest point to the Sun. It’s only about 300 feet across, and it was close enough to Earth to be seen for a short while.

Objects passing through the solar system that aren’t gravitationally bound to the Sun must be moving very quickly, although all paths are bent around their closest point to the Sun. The eccentricity of an elliptical orbit around the Sun is represented in the mathematical elements of the orbit by a number between zero and 1. The eccentricity of an object that is going too fast to be captured by the Sun has a value between 1 and infinity. The value in this case is about 1.2, and the object’s velocity entering the solar system was about 59,000 mph. It was probably ejected from another star many light years away and millions of years ago, although it is from the “disk” of the Milky Way and not the more exotic “halo”. A “halo” object would probably be moving faster.

‘Oumuamua’s orbit can be simulated in Starry Night Dome. The orbital elements are a little on the uncertain side because of the short duration of observations between discovery and it zipping out of range. And the effect of the over-unity eccentricity appears to “break” the position of the object during times before February 2016 or after March 2019. But the 3 years when it’s at its closest point to the Sun are replicated pretty well.

To add ‘Oumuamua to SciDome Version 7, right-click on the Sun in Starry Night Preflight and select ‘New Asteroid…’ and enter the following values in the details window that pops up, using the ‘Pericentric’ method instead of ‘Near-Circular.’ Also pick an appropriate name in the ‘Untitled’ field.

Once you close this details window and “keep” the new object, and quit SciDome properly, the new object will be written to a file called “User Planets.ssd”. You need to copy this file from its location on Preflight to the Renderbox for it to be “live” on both computers.

This file needs to be copied and installed on the Renderbox at the comparable folder location:

Please contact me if you need a little extra guidance on making this work. After this is done, the object should be “live” in Starry Night on the dome during the current “Now”.

You can also fly out to the object and watch the planets and the Sun fly by as its lumpy asteroid shape zooms past. I would recommend one special piece of orientation for objects like this. During SciDome training, one of the choices we emphasize when looking at a solar system object from above is that you can “Rotate With” or “Hover Over” the planet or moon below. If you “Rotate With” while looking down at the United States, and speed up time, the Earth won’t appear to rotate, you can see successive nightfalls and daybreaks over North America, and the background stars will rotate around in the background. If you “Hover Over”, as time passes North America will rotate away to the east, Asia will appear out of the west and the fixed stars won’t move. The Sun Angle won’t change much either.

We don’t always drill down far enough to distinguish between “Hover Over” and “Follow in Orbit” because it takes more than a month of time flow to accumulate a 30° difference between the two. But in the case of ‘Oumuamua, because its position with respect to the Sun changes so quickly, you might want a way to keep the Sun Angle constant so the source of illumination won’t rotate away from your point of view and you “lose the light”. “Follow in Orbit” is a useful orientation choice for an object like this.

A little bit of hay has been made of the way the incoming path of ‘Oumuamua leads back towards the constellation Lyra. This can also be simulated in Starry Night. The brightest star in Lyra is Vega, which was the fictional location of the first extraterrestrial signals in the Carl Sagan novel Contact. Sagan may have picked Vega to use in his book because it has been known for some time that the motion of the Sun and the solar system through the Milky Way is in the general direction of that star.

The great American/Canadian astronomer Simon Newcomb wrote in Elements of Astronomy – a book Sagan would have known – “The motion of our solar system toward the constellation Lyra is one of the most wonderful conclusions of modern astronomy.” However, as we move in the direction of that constellation, Lyra and the other stars in it have their own movements that will scramble them all out in other directions as time passes.

The proper motions of the stars can also be turned on in Starry Night as a series of artificial lines, and simulated back and forth through a couple of hundred thousand years of movement centered on the present if you switch to a “Stationary Location.” These proper motions may appear random, but if you highlight some of the closest and most well-known nearby stars, you can track them moving away from or toward the direction of Lyra as time passes forward or backward with some coherence.

For the last couple of days, there has been some news coverage of another small asteroid that’s going to fly close to the Earth tonight. This happens fairly often, although it is a little unsettling when it does. We have just passed the 9th anniversary of the discovery of a small asteroid that was on a collision course with Earth in October 2008. That object produced a fresh field of meteorites in Sudan.

The new asteroid 2012 TC4, was discovered on October 4th, 2012. It flew past Earth on October 12th of that year, 96,000km away. It’s only 13 meters across, and small asteroids like it and the other one tend to be discovered only when they are close enough to the Earth to be visible in large telescopes. Because the orbit of 2012 TC4 is tangent to the orbit of the Earth in October, the only time during the year when Earth and TC4 can be close together is in October. Since that 2012 encounter, the period of TC4’s orbit has been 1.67 years, so we are bound to be close together again after a five-year interval.

After this evening’s encounter, when only 43,000km will separate Earth and TC4, the period of its orbit will be lengthened to 2.06 years. The asteroid orbit will still be tangent to Earth’s orbit in October, and that extra 0.06 of a year will accumulate and may put the asteroid back close to Earth in October 2033 or 2050.

The way Starry Night simulates asteroid orbits in a conventional way depends on those orbits not changing very much. The Keplerian orbital elements model just requires six numbers that describe the orbit of an asteroid around its parent body. Starry Night models these numbers with an accuracy of up to 7 decimal places, and that’s accurate enough to describe asteroids in most of interplanetary space. Keplerian orbits do not simulate the way the Earth’s gravity can deflect the orbit of an asteroid around the Sun, and any asteroid that passes really close to the Earth will be deflected in that way. So the best way for us to simulate TC4’s encounter with Earth in SciDome is unconventional.

I have prepared a “Space Missions” file, composed of a set of state vectors from the JPL website that describe TC4’s path for the 8-day period centered on this week’s encounter. It accurately models the way TC4 will sneak as close to Earth as the belt of geosynchronous satellites, and the orbit should be accurate to 0.1km and about 10 seconds in time.

The space missions dataset, and the JPL data format that can make data for it, are originally meant to simulate spacecraft, not asteroids, but the way the data is presented is mostly the same. Although if you “fly to” TC4 in Starry Night, it will look like a space probe and not an asteroid.

If you have a recently updated SciDome, you can get 2012 TC4 on your dome by downloading this zip file, opening it up, then installing “2012 TC4.xyz” on your Preflight computer at the following folder location:

It may be necessary to create a “Space Missions” folder in Sky Data here. If it is, it should be named just so.

If you have an older SciDome, the destination folder for the new file is a little different. Please contact me for directions.

With that done, the next time you run SciDome V7, you ought to be able to find 2012 TC4 by typing it into the search engine field at the top of the pane you choose to use as your “Find” pane. The “Celestial Path” or “Local Path” can be highlighted to show its course across Earth skies, and its “Mission Path” can be highlighted to represent its three-dimensional path through space around the Earth. The position of TC4 will only be simulated during the current 8-day period. If interest in it persists, its new orbit ought to be stable enough to represent with Keplerian elements after everything settles down.

TC4 will be passing through the constellations Aquarius, Capricornus and Sagittarius this evening. I used the JPL data to set up a prediction and make a reservation to use a 150mm online telescope in New Mexico tonight to try and take some images of TC4 as it passes by. We’ll see how it goes. Please feel free to contact me if you would like a little more guidance on installing 2012 TC4 on your SciDome.