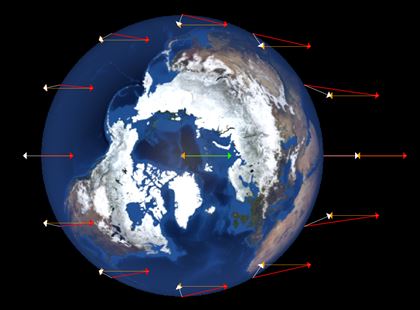 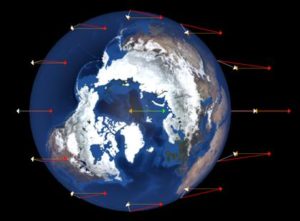 Three long-awaited fulldome astrophysics apps created by Dr. David H. Bradstreet are now available for purchase and immediate download for installation on SciDome systems. Tides, Newton’s Mountain and Epicycles are selling for $200 individually or $500 for all three.

These programs teach the difficult concepts of tides, orbital motion, and epicycles in unique ways on your dome.  All three programs are completely controllable via an intuitive interface on your Preflight computer.  In addition, Tides is controllable via SciTouch for a seamless teaching experience for your audience.

The respective At A Glance teaching guides are all available for free download if you’d like to preview what you can do with these unique Fulldome interactive programs:

Our ancestors were highly intelligent people who devised ingenious methods to model what they perceived to be reality in the skies. Unfortunately, they came at many of these observations with deep-rooted prejudices and a priori (preconceived) beliefs which shackled their creativity.

Figure 1: Close up of the Ptolemaic system out to the Sun’s sphere

The prevalent, far-reaching belief was that the Earth was immovable and at the center of the universe. Of course we know this is preposterous (even to the point that there is no such thing as a center to the universe), it is still a useful exercise to challenge students to prove, without leaving the Earth or using satellites, that the Earth does indeed rotate and that it revolves about the Sun.

Another a priori assumption was that celestial bodies never stopped moving, as opposed to “earthly” objects which eventually came to a halt. So, when the planets periodically went back and forth in the sky, this was unacceptable and Apollonius of Perga came up with a “solution” that allowed the wanderers to be always moving without stopping by coupling two motions at once. The planets were not simply attached to a mystical sphere (“deferent”) but they were actually attached to a mini-sphere (“epicycle”) which rotated on the larger one.

In this way planets could move around the sky but intersperse that generally easterly motion with apparent backwards motion (retrograde) when the transparent epicycle carried the planet backwards.  The ancients latched on to it and it was greatly preferred to having deferents slow down, stop, go backwards, stop, then resume their original direction.

My colleague David Steelman and I created a program called Epicycles for SciDome that illustrates the main characteristics of the Ptolemaic Geocentric Model.  It helps students discover the systemics of the model which can only be explained as “it just has to be that way”. Whenever that is the reasoning, it signals a problem with the theory/model.  This will become obvious as we go through this paper.

Let’s first take a close look at the bodies closest to the Earth in the geocentric model, as shown in Figure 1.

The Moon moves the fastest in the sky (and even changes shape!) so it was assumed to be closest to Earth.  Placement of Mercury and Venus closer to the Earth than the Sun was problematic.  The theory was based upon the idea that those that appeared to move the slowest must be farthest away from Earth.  The problem is that the epicycle containing Mercury, the epicycle containing Venus, and the Sun all orbited around the Earth in one year!  So their order was reluctantly agreed upon because Mercury moved fastest on it epicycle, Venus next fastest, and of course the Sun had no epicycle (because it never retrograded).

Figure 3: Venus and Mercury’s retrograde paths in the Ptolemaic system

The epicycle sizes are based on arbitrarily assumed distances from Earth. The angles had to match the size of the retrograde loops seen in the sky so, looking at Figure 1, Mercury’s epicycle is tiny compared to Venus’ because Mercury’s retrograde loop is about 52 degrees in extent whereas Venus’ is about 92 degrees! The fact that Venus is farther away than Mercury from the Earth in this model requires it to be considerably larger than one might expect, but these are to scale to create the properly sized retrograde patterns.

As time is progressed a trace can be turned on which shows the retrograding patterns of the planets. Figure 2 shows a close up of Mercury and Figure 3 that of Venus.

When I ask students if they see anything peculiar as time progresses, eventually someone notices that the centers of the epicycles of Mercury and Venus are exactly and always lined up with the line connecting the Earth and Sun (the Earth-Sun Line). What explanation would the ancients have given for this? “It just has to be this way for this model to work.” Red flag number 1 that there’s something wrong with this theory.

Figure 4: The planets beyond the Sun’s sphere

Of course we know that in the Copernican heliocentric model we don’t need epicycles to cause Mercury and Venus to wobble back and forth around the Sun because they are simply closer to the Sun than Earth and they orbit the Sun. In fact, Copernicus was the first to completely untangle the motions of Mercury and Venus from the Sun’s motion.

This confusion is one rarely-discussed reason why the Copernican heliocentric model was so appealing. It unambiguously separated the motions of Mercury and Venus and even established, for the first time, their orbital periods around the Sun (88 days and 225 days, respectively).

Now observe the planets beyond the Sun, as shown in Figure 4. As we advance time another strange systematic displays itself, although this one is a lot more challenging to pick out. The Earth-Sun Line is always parallel to the planet’s epicycle radius!  You can easily see this in Figure 4 now that you know to look for it.

Again, the ancients noted this “coincidence” but could never explain it other than “it has to be this way for the model to work.” Another red flag has raised itself in the flawed Ptolemaic model!  The basic reason for this “coincidence” is because the retrograde motion of each planet is a function of its position relative to the Earth in its own orbit. Since we’re locking down the Earth and moving the Sun, it’s the orientation of the Earth-Sun Line that is the determining factor as to when planets exhibit their retrograde motions.

When the planets leave breadcrumbs (see Figure 5) their retrograding paths become obvious. Again, the model has been carefully defined to accurately recreate the width of the retrograde loops as well as their frequency.

This is a fun and thought provoking lesson for my students because it demonstrates how intelligent and clever the ancients were in mimicking celestial motions, but it also shows how preconceived notions can weigh one down and severely complicate the model. It also clearly points out that when certain “features” of a model have no other explanation than “it has to be that way for the model to work” that the model is most likely flawed or incorrect at its core. But having the Earth move was a huge paradigm shift, and it took over 1500 years to overthrow it!