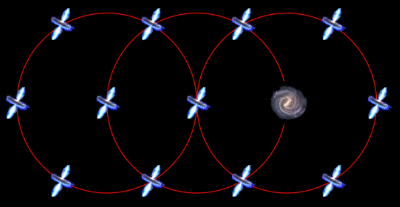 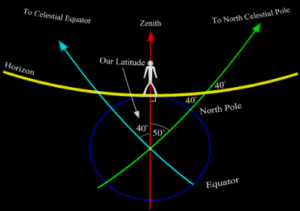 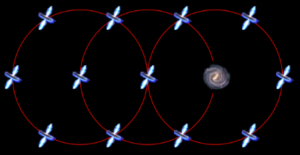 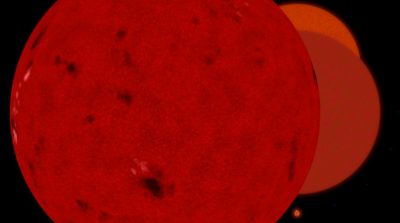 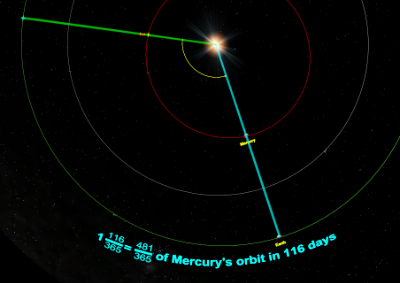 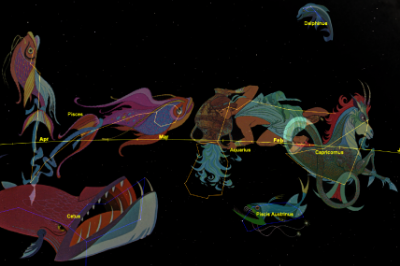 As the NFL season gets into gear (Go Bills!) it’s time to mention football’s deep connections with astronomy.

The 1927 Broadway musical Good News, which gave us the popular song “The Moon Belongs To Everyone”, is about the division in college life between sports and astronomy, as the male lead of the play tries to skip out on astronomy class to help the school team win the football game.

The area of a football field is often used as an astronomical scale, to point out that the International Space Station is about 1.3 yards shorter than the length of an American football field, or to use various kinds of fresh fruit to simulate the size of the Solar System (not to scale.)

One of my favorite asterisms that isn’t included in the Starry Night gallery for SciDome planetariums so far is the Winter Football. There is a Winter Triangle asterism that is drawn between the bright winter stars Betelgeuse, and Sirius and Procyon, but the Winter Football is much better. If you can imagine a shape drawn between Sirius, Procyon, Pollux, Castor, Capella, Aldebaran and Rigel, it looks roughly football-shaped. For the full conversion, the stars that make up Orion’s Belt can be the stitching. The open-source nature of Starry Night allows the user to create new asterisms like this.

To illustrate the Winter Football on SciDome, download this zipped folder with three files: Winter Football.txt is a short code file that describes the lines drawn between these stars, and the label of the asterism. This file was built using the same template used by Dr. Bradstreet in his Spitz Institute lesson about building custom asterisms.

The second file is a .PNG slide of a cartoon football with a transparent background. For extra verisimilitude, after the stick figure of the football is highlighted on the sky, ATM-4 can be used to bring up the details of the football itself.

The third file is an image with the Winter Football asterism highlighted, showing the sky as it will appear during Super Bowl LII on the 1st Sunday in February of next year.

To use this file in an updated Starry Night Dome 7 for SciDome, it should be added to the folder location:

In older SciDomes it may be necessary to load it onto folders on Preflight and Renderbox computers in two separate steps. Please contact me at Spitz Support for details.

The football slide can be used from an appropriately named subfolder of your Preflight desktop shortcut Slides folder. It should work well in semitransparent mode.

All of these uses of getting sports fans interested in astronomy carry no risk of personal injury.

The pointer stars Merak and Dubhe point at Polaris and go once around per sidereal day, every 23 hours 56 minutes and 4 seconds.  By making a daily correction it is possible to estimate the time at night using these three stars.

One point on this is pretty much intuitive. What is the Right Ascension of Merak? Well, it’s about the same as Dubhe, because a straight line joins both stars to the axis of the celestial clock, the north celestial pole.

But what is that angle, really? Well, it’s 11 hours of Right Ascension. Or, if you use Daylight Saving Time, it appears to be 12 hours.

On another day of the year, at the moment when the line joining Merak, Dubhe and Polaris is vertical in either direction, if you know the date, you can make an estimate of the time in Daylight Saving Time.

So because tonight is 0 days after September 21st, at the moment tonight when the line between Polaris, Merak and Dubhe points straight down to the northern horizon, you can estimate that it’s about 0*4 minutes before midnight, Eastern Daylight Time. (copy and paste, and replace the zeroes for different dates.)

This system doesn’t work perfectly because it’s the same Daylight Saving Time in Detroit as it is in Boston, although the angles of objects in the sky are different. But it is predictable, if you know that you live east or west of the Central Meridian of your Time Zone, to expect objects in the sky to run reliably fast or slow.

Please refer to the Bradstreet Fulldome Curriculum Vol. 2 Minilesson ‘Time Zones’ and the printed lesson plan in the binder for more detail on time zones. The asterism line representing the Pointer Stars, and the Meridian to show the time when the Pointer Stars are vertical, can be drawn in with Starry Night, and in ATM-4 as well. Please refer to the FDC 2 ‘Hour Angles’ Minilesson and its printed lesson plan to interpret how to use other objects in the sky as a star clock.

Because the Pointer Stars are vertical at (DST) midnight on the Equinoxes, they are terrifically useful for this, but the Minilesson might suggest stars for you that have hour angles that are also convenient to remember for relating to the dates that index our seasons. Right-click on a star and select ‘Hour Angle Lines’ to get a dynamic readout of the time since the last moment it crossed the local meridian to the south. The minilessons ‘Time LAST (Local Apparent Solar Time)’ and ‘Time LMST (Local Mean Solar Time)’ use very similar tools.