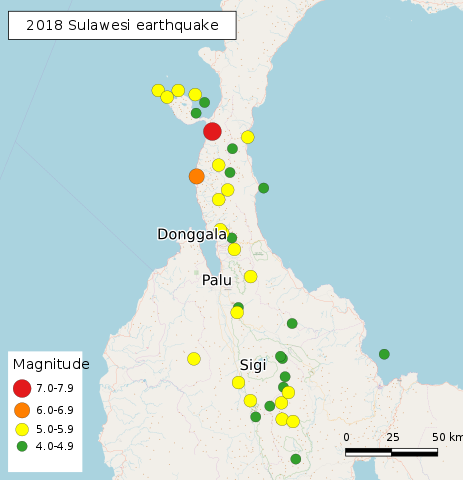 Sulawesi Earthquake in The Layered Earth

When we’ve been discussing applications of Starry Night in the dome, there was usually little need to worry about the human element, but with The Layered Earth (TLE) this is different. Most of the layers we use and stories we’re going to tell are about consequences that profoundly affect humanity.

Earlier today a large earthquake struck Sulawesi, an island in Indonesia. There’s a cluster of shallow (red) tremor marks on TLE’s 7-day USGS Earthquake Data layer, but if your SciTouch can’t identify the main M 7.5 event, please check the layer’s “settings”. 7.5 is actually the maximum strength of quakes that can be shown with this layer, and the layer settings may specify and earthquake like this is “offscale high” unless you widen the scale.

A tsunami caused by this earthquake appears to have devastated the city of Palu, which is very close to the epicenter of the quake. Palu is located at the far end of a long bay that opens out onto the Makassar Strait. The effect of the tsunami may have been magnified by the shape of the bay. Social media is already carrying video of the tsunami that’s comparable to the 2004 Indian Ocean and 2011 Tohoku events.

The Makassar Strait is not a tectonic plate boundary that can be seen in TLE, but Indonesia is located at the convergence of several plates and there are lots of tectonic fault lines that are not located on plate boundaries. The Palu-Koro Trandform Fault can be seen in TLE in the indent under “Fault Types” layers, and the “Global Strain Rate” layer is red in that area.

The earthquake was detected at Greenville, DE even though the range to the earthquake (15323 km, or 138°) puts it inside the “shadow zone” created by refraction of primary vibrations off of the outer edge of the Earth’s liquid outer core. Weaker earthquakes that are between 104° and 140° away from the detector generally aren’t picked up because of the “shadow zone”, but stronger ones generate enough primary and secondary vibrations that the shaking is picked up worldwide. But it takes longer for these waves to be picked up. If you’ve experienced an earthquake you may have felt the gap between the arrival of primary and then secondary vibrations.