Venus and the Pleiades April 3

There is an upcoming event in the evening sky that is worth notifying your colleagues about on social media this week. Venus is going to pass in front of the Pleiades star cluster on Friday, April 3rd. The neat thing about it is that this happens every 8 years, to the day. You can simulate it on SciDome in Starry Night.

Venus is the brightest object in the evening sky other than the Moon this month, and it is provoking lots of UFO reports. Venus is also getting closer to Earth, so its apparent size is growing. Venus is also starting to turn into a crescent as it gets between the Earth and the Sun. It is a fascinating object to observe through small binoculars, especially when the Pleiades are also visible in the same binocular field of view.

Venus orbits the Sun every 225 days, but the Earth orbits the Sun as well, and it takes more than a year for Venus to catch up to the Earth and pass us. Venus returns to the same position with respect to the Earth every 8/5ths (or 1.6) of a year, or 584 days. Because it’s not equal to a year, when Venus returns after 584 days, it’s not in position against the same background stars. However, the lowest integer multiple of 1.6 is 8, so Venus does appear against the same background stars on the date when it passes the Earth every 8 years (although a backwards drift of 2 days per 8 years accumulates.)

We’re familiar with the analemma, the figure-8 pattern the Sun draws on the sky if you animate Starry Night forward in steps of 1 day at noon. Venus also has an analemma, but it’s a spirograph pattern instead of a figure-8 because its Synodic period repeats five times over the course of those 8 years. This spirograph pattern of Venus’s Local Path at 1-day intervals in Starry Night is really cool. 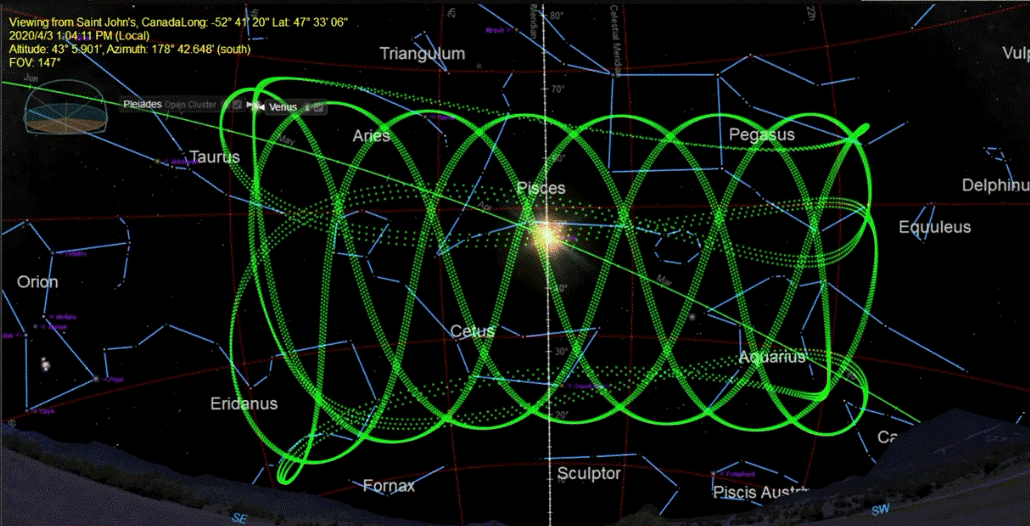 The first time I observed Venus in the Pleiades was on April 3rd, 1996, and I recommend you look up that date in Starry Night especially. Also on that date in the evening there was a total lunar eclipse in the eastern sky, and also the bright Comet Hyakutake was in the western sky just a few degrees away from the Pleiades.

So please make your community aware of the coincidence of Venus and the Pleiades this week, so they can look up again on April 3rd of 2028 and remember what they were doing 8 years earlier.